skip to main | skip to sidebar

Whites Have Lost the Will to Live?

A White South African testifies: “There exists in South Africa today a racial hatred that I never experienced in my youth”

Edwin is South African and his origins can be traced as far back as the XVIth century, when Dutch and French Huguenots set foot in Southern Africa. He is 50 and left a teaching profession to work in computer programming. In an exclusive for Novopress France, he talks to us about White South Africans’ daily life since the fall of Apartheid. A testimony without make-up or concessions. A warning to white Europeans.

Novopress : How do you perceive the changes since the fall of Apartheid?
Edwin : Since the ANC took power, our daily life has been affected by many changes. The biggest single change was the creation of fear. Fear of crime, which has skyrocketed since the ANC government took over. South Africa now has the highest rape incidence in the world. People fear leaving their homes, on foot or in public or private transport. People fear sounds they hear at night and with good reason. My elderly father fears tending his lawn on the sidewalk as old people are a very popular target.It is not just Whites that live in fear. It is everybody. Even criminals prey on one another. Very often, the police appear to be inefficient, due to a lack of discipline and because corruption is rife.

Novopress : Have you been yourself victim of violence?
Edwin : Not personally but two of my friends have been murdered during robberies. Many of them as well as some of my own family members have personally experienced the “big 4″. In the old days we used to refer to the “big four” as the lions, elephants, buffalo and rhino which are a popular tourist attraction in South African game reserves. Nowadays the South African “big four” are commonly referred to as robbery, rape, car hijacking and murder.

Novopress : You were a teacher. What is your opinion on education in your country today?
Edwin : I had the privilege of a very good education. Today, South Africa features at or near the very bottom worldwide. Education standards have become a national joke. Private schools are very expensive. Education is one of the main reasons for White emigration.

Novopress : Can you give us a retrospective analysis of the situation?
Edwin : I as a White man stand accused of causing suffering to Black people, something I totally deny. It is claimed I had tremendous advantage while other paid the price… but is this true? While well funded communist terrorists tried to enter South Africa from beyond our borders - after years of Marxist indoctrination in USSR - I was called up by the military to fight for three years to defend all South Africans from communist aggression. Black people were not forced to serve in the military as I was, although Black volunteers were accepted. Whites were required to fund the Black homelands to educate them and build viable infrastructures. Before his arrest, Nelson Mandela created the largest terrorist group, “MK” (Umkhonto we Sizwe, spear of the nation). Read his book “How to be a good communist” for a picture of what we were up against. He was made an icon for having avoided a blood bath but his liberation, wished for by a cabal of international finance, has contributed to nip in the bud a planned White insurrection. From its base in nearby Botswana, the American army wouldn’t have let us off lightly… 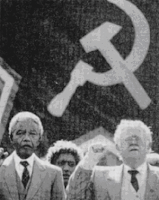 Image Hosted by ImageShack.us
Nelson Mandela with Joe Slovo, president of
South African Communist Party (SACP),
in 1994, after his liberation

Blacks were never forced to contribute to their own education, health services or general state expenses. This was a negotiated process and some local Black leaders supported the uplifting of their homelands. Others did not and It was a confusing time. As the weight of our responsibilities became heavier and heavier to sustain as their number increased, we could not understand the international outcry which demanded that we capitulate to the communist onslaught; that we submit to the wind of history, of change blowing over Africa…

Black men, leaving their universities, were enrolled in Europe to master their knowledge of democracy which, ironically, materialised upon their return, by a wave of terror: intimidations, assassinations, terrorism, torture, mostly perpetrated against their own… We found incomprehensible the publicity, the praise around these men who were essentially motivated by personal ambition, and the suppression against wise leaders such as Buthelezi in South Africa and Muzorewa in Zimbabwe, supported by a majority of their respective communities.

Novopress : What is , in your opinion, the assessment of this mess?
Edwin : Racial hatred has now also become a big issue. When I was young I never experienced hatred from Black people. We lived generally peaceful lives. Today the hatred stems almost totally from young Black youngsters who never experienced Apartheid, but are taught to hate the White man. The new school history is full of blame of the White man for every problem Blacks today endure. White children are made to feel guilty and Black children are instilled with resentment against Whites. Nevertheless, generally there is still respect between Whites and the older Black people who are disillusioned, for nothing better has come out of the new regime. On the contrary, work is scarce since the country’s boundaries have been opened wide, letting in hordes of people from the north, in search of an Eldorado which doesn’t exist anymore.

Shanty towns, squatter camps around big agglomerations are on the increase and the presence of foreigners, perceived as a threat, are giving rise to a resurgence of the tribal identity of Black South Africans, little concerned about human right principles (1)…

Moreover, for everybody, Black, White, Coloured and others, a new amoral way of life has become normal. Family values are no longer held sacred. Drug use, previously unknown, has now become a rampant problem. Those who can afford to send their children overseas to complete their education or to work, do so. Entire families, particularly Whites, emigrate in large numbers because of affirmative action. One out of every five White person has now left the country permanently. About two millions have settled abroad, mostly in Australia, Canada and England.

It is despairingly common to see aged parents who have children spread around the world, just waiting to die with no loved ones near them. Emails become their daily source of hope and affection while all physical contact is lost. Only the poor remain, and those who are too old to adapt to a foreign culture. We live from day to day, avoid the crime where possible, and sometimes long for the old days.

Image Hosted by ImageShack.us Thousands of Whites have been assassinated, sometimes tortured, horrendously mutilated, without apparent reason. It is a genocide but again, no voice is heard in protest. We have learnt, at our expense that it is not politically correct to fight for any White skin victim. Only Whites, can be racist, isn’t it? Indian and Coloured communities feel the pinch as well. Poverty is on the increase. Whites cannot live in Black areas because it is too dangerous for them, but Blacks flood into previously White areas bringing their culture of crime and high noise levels with them. We have no defense. The commandos have been dismantled. Our culture is not respected or even acknowledged. The few Whites in parliament are boot-lickers who do not represent us. Very few White people bother voting in elections here. There is no point. Many of us regard ourselves as stateless persons who have no choice but to live in this hostile country we happen to have been born in.

Novopress : Would partition be viable?
Edwin : Some people have tried to create White enclaves where we may be free to have our own culture and raise our children without government interference. The largest is Orania (2) in the Cape Province. In order to avoid Black repression, Orania was built in a semi-desert region where no Blacks have ever wanted to live. Despite this there have been several legal attempts to destroy Orania. Recently, the government talked about incorporating it into some distant Black township which would have created a White minority without autonomy. Until now, Orania has survived at an enormous cost of sacrifices and legal procedures. More than a thousand people initially settled there, but reality has brought the number down to about six hundred. Orania has become a sort of live symbol where many Whites would love to live but legal threats and poverty prevent. 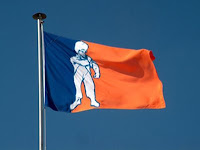 Image Hosted by ImageShack.us Novopress : Our struggle(3) in the eighties, gave us the impression to be the last White bastion, the defense dyke of European Identity. Today Edwin, what advice would you give to Europeans who feel threatened?
Edwin : The West didn’t want to see in our fight a prelude to its present situation. I will not forget that you have fought by our side, that you’ve been one of us… At least, did you have the choice of leaving, refusing submission… But for how long still? I have noticed that all around the world, the majority of Whites have surrendered. I won’t mention America but in Europe, they grant foreigners, Blacks and Moslems in particular, so much right to their culture and their vital space that they have forgotten theirs. The founders of European civilisation have conceded their right for existence without caring in which hands it falls. It seems to me that, everywhere, Whites have lost the will to live.

Any advice? Resist, unite, stand up always… Preserve or take root again, in rural areas notably, as it is by being with nature that we regain our soul.

Novopress : Thank you Edwin. Despite your tribulations, I know that you and your own have kept the call of the Great Trek within you and that the blood that animated the spirit of your ancestors in their insatiable quest for freedom still flows strongly.

(1) Recent events in S.A. have proved this comment pertinent
(2) As the Orange Free State, Orania was named after the “House of Oranje”, the Dutch royal family having been very supportive of Whites in South Africa centuries ago.
(3) Michelle F. Jirard lived many years in South Africa and participated in the defense of her community.

How Evil was Apartheid?

Why Rhodesia is in Ruins

Where angels fear to tread
Posted by David Ben-Ariel at 10:13 AM

I'm not a terrorist

Born Again: The Kingdom of God!

An Alternative to the UN